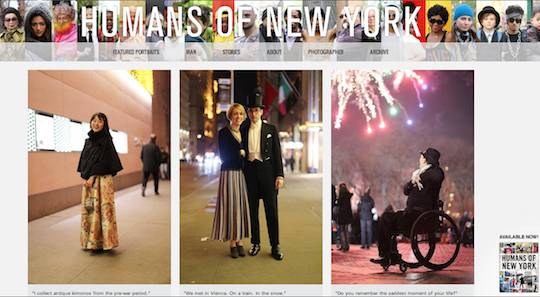 I’ve been in the internet industry for over a decade and there are many, many websites I like. However, only a handful make a difference,  and a select few make a positive global impact. For this reason, I’m choosing to feature Humans of New York. The concept is simple: Brandon Stanton goes around New York, taking pictures of strangers while asking them about themselves, soliciting a piece of advice, all of the above, or neither — some just strike a pose.  The result of all of his efforts was brilliant and his blog (which I discovered earlier this year via Tumblr!) led to a book that even recently became a #1 New York Times Bestseller!

As a person who loves people-watching and speculating on everyone’s thoughts, feelings, and potential history, I found myself  spending several hours on HONY as soon as I learned about it. I loved getting to know these strangers who reveal so much in a single poignant phrase. There are some striking individuals whom I would probably never meet in my life, but had the honor of getting to know about even for a brief moment. The wisdom that Brandon finds in the streets of New York, the stunning candor that’s almost visceral, and the warmth that comes through his blog reminds me that every single person has something to offer in this world. That everyone is a beautiful piece on a vibrant mosaic we can all call our own.

A library from trash